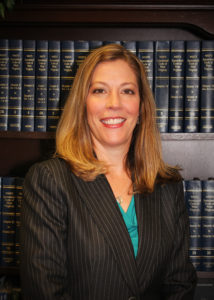 Amber Urtso Sellaro was born in Columbus, Ohio, but has spent the great majority of her life in her beloved adopted home state of West Virginia. She graduated with honors from West Virginia University with Bachelor’s degrees in Journalism and Political Science. Setting aside aspirations to become a political reporter, Amber chose instead to attend West Virginia University College of Law, graduating in May of 1995 with her Doctorate of Jurisprudence. During law school, Amber interned at Fusco & Newbraugh. After graduation, she began her legal career at the Fairmont law firm of Manchin, Aloi and Carrick, where she spent three years. In 1998, Amber hung her own shingle as a solo practitioner. Then in July of 2007, she joined forces with Natalie J. Sal, and over the course of the next few years, she has watched and participated in the growth of the firm that is now known as Sal Sellaro Culpepper Legal Group, PLLC.

As an intern during law school, Amber got her first taste of domestic relations law and knew then that she wanted to concentrate her practice in that area. She has also handled many other types of cases throughout her career, including personal injury matters, misdemeanor and felony criminal cases, juvenile matters, and abuse and neglect proceedings. She has appeared before the West Virginia Supreme Court of Appeals. Despite this varied background, she has followed her original instinct and focused primarily on domestic relations matters, including divorces, paternity and custody proceedings, child support actions, and adoptions.

Amber’s life unabashedly centers around her two beautiful daughters, Anna and Sophie, because she adheres to the belief that “you only get one chance.” She has also volunteered her spare time as a Sunday school teacher, a soccer and basketball coach, and an officer and parent helper in various school related organizations. In 2015, she become a co-owner of The Elegant Alley Cat, a classic gift store in downtown Morgantown. Amber also makes repeated but almost always futile attempts at home improvement and gardening. And through good seasons and bad, she remains an avid fan of WVU basketball and football.